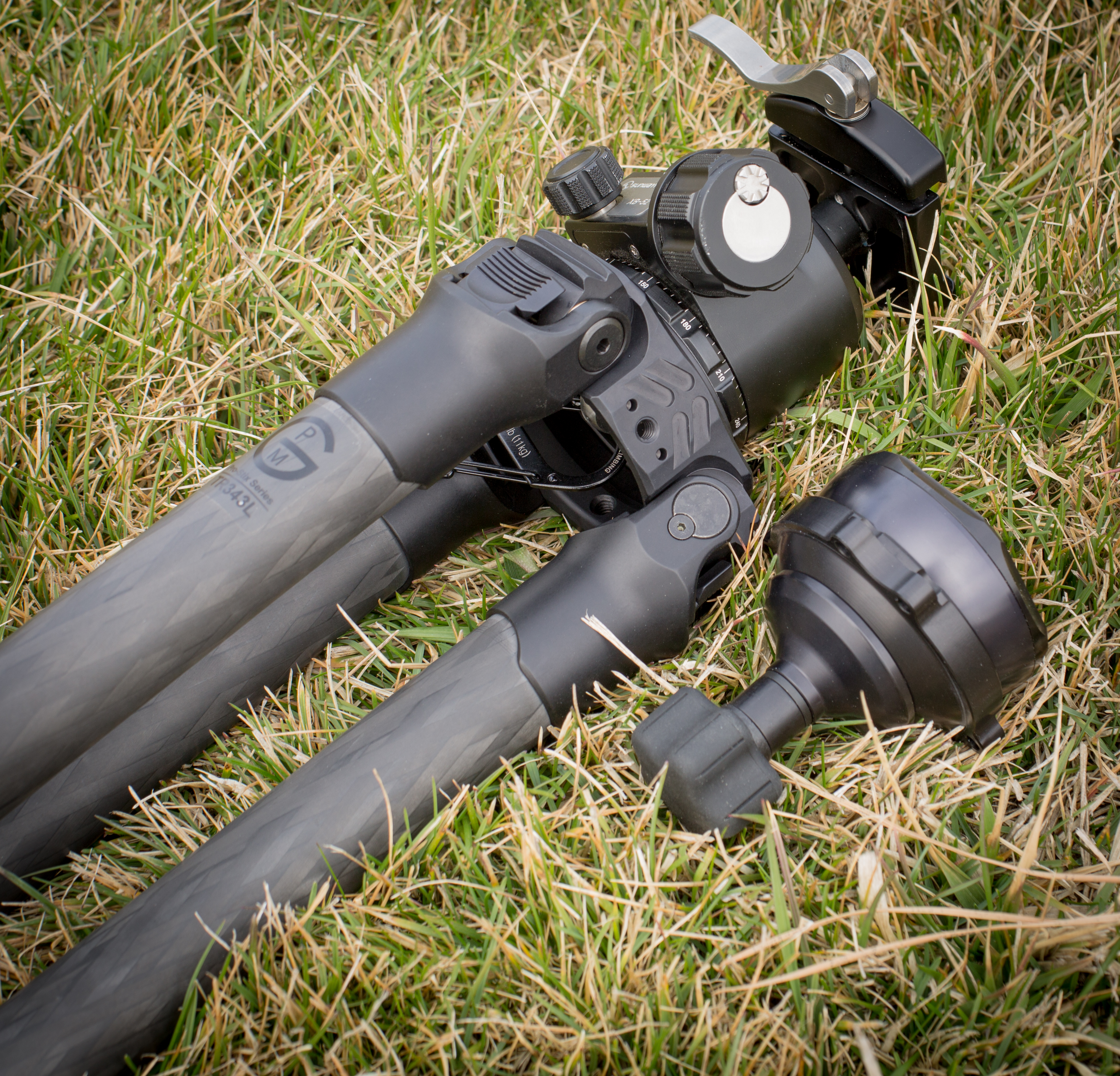 I started shooting from tripods at a young age when I became a sniper. From then to now it’s been an incredible transformation with regards to the gear and the stability we now have with modern tripods. I started off with 3 wooden dowels lashed together with paracord that would get me a high kneeling shooting position. Crude, but pretty effective for the application and the quality of camera tripods that were within the affordability of a young Lance Corporal in the late 90’s. Moving forward I started to use camera tripods for stalking exercises that would allow me to go up to the standing position, but the stability wasn’t even close to being able to shoot from with any semblance of stability for surgical shots. The US Marine Corps pioneered the way forward with focused efforts in tripod shooting after the onset of the Global War on Terror. The Marine Corps Urban Sniper Course was, and still is, very focused on tripod shooting. The Scout Sniper Basic Course has followed in step as well, now using tripods in their qualification courses of fire. Let’s face it, the tripod is the only tool that the sniper can bring with him that virtually guarantees he’ll have a stable shooting platform from which to engage targets in all environments. Now in 2018, we’ve got a smorgasbord of options to choose from when shooting from tripods.

There’s a common trend in the shooting industry to go with whatever the next guy has in terms of gear. It’s everywhere, from reloading equipment to shooting gear and gadgets, to clothing. I tend to go against the grain and look for stuff that supports either my friends in the industry, or find other brands that offer the same capability and features. Innovation and discovery doesn’t occur through stagnation. Obviously Really Right Stuff has come to the table as the industry standard for tripods within the PRS/NRL community. They pretty much swooped in and took Manfrotto’s place, and that’s a good thing; they make a superior tripod that offers more stability and rigidity. RRS took it to another level and developed the SOAR line, which focuses on tripods and accessories for the shooter. Good on them, they were smart to do so. However, they come at a pretty hefty price tag. Don’t get me wrong; I’m not mad at that! In this industry quality comes with a price, and it’s usually a one and done thing if you do it right.

I was trolling (err… perusing, rather) the interwebz one night and stumbled across an individual who had posted about a tripod he had bought from a not-so-well-known company called Pro Media Gear (PMG hereafter), and from the photos it looked like a quality setup. I did some initial research, and after liking what I saw, I placed my order. I had to do some searching for vendors, as PMG didn’t have the TR 343L Pro-Stix 59” 3 leg section tripod in stock. I found it on Amazon for the same MSRP as the website coming in at $849.00 I pulled the trigger and had it at my door three days later. Amazon dude….. Along with the tripod, I wanted to go the leveling head route, so I got the TRBU 75 Leveling Head for $99.95 and the TRB 75 Bowl Adapter for $39.95 from PMG’s website. That also made it in three days, which I thought was equally cool. Looking through PMG’s ARCA Swiss clamp offerings, I didn’t see anything with a quick release lever, so I went with the RRS B@ 40 LR M6 Level Release for $105.00 All in all, I’m sitting at $1093.90, not including shipping.

Initial impressions on the tripod and the accessories from PMG were awesome. Packaging was on point with required tools for making adjustments, and they offered a gear hook to connect to the bottom of the apex for additional stability if you wanted it in high wind days. The apex of the tripod is made from T6061 aluminum. The apex has three points for bolt-on accessories, and I imagine that one could create a sling swivel adapter much like RRS has done on the SOAR line. The overall construction of the tripod is obviously high quality. The machined parts have flawless fit, and everything is smooth. The legs have three angled positions, allowing the tripod to go as low as 3.8” for a reasonable prone position if need be. The leg angle stops are made from machined aluminum as well, so no more broken cast aluminum stops like we dealt with from Manfrotto. The 34mm leg diameter is beefy and there’s zero flex in the legs, even at full extension, for a height of 59.3” Folded up, the tripod is at 25.1” without a head on it, and it weighs 3.9 lbs. Not overly heavy at all, but it won’t be accompanying me on extended backcountry trips, that’s for sure.

The apex of the TR 343L has accessory mounting points on three sides, and we can see here the quality of the machined parts that join the legs to the apex.

The apex of the tripod comes with an attachment ring and a small non-load bearing carabiner which is useful for hanging a backpack from in really windy conditions.

The TR 343L can be adjusted to go into a comfortable prone position, and if the user wanted to lower the rifle more, the rifle could be directly mounted to the ARCA clamp.

The leg extension twist locks are beefy, and they’ve got a great knurling pattern on them that’s coarse enough to have tactile manipulation with gloved hands, and the friction they produce to lock the legs isn’t much which makes for rapid adjustments. Another nice feature; the tripod rubber feet can be removed and hidden inside them are steel spikes for additional foot security if needed.

The knurling on the leg twist-locks is plenty aggressive for gloved use, and the tripod feet have cleverly installed spikes hidden inside them that can be reversed for using the tripod on slippery or muddy surfaces.

After I installed the leveling head and threw a rifle on it, I immediately noticed that the leveling head locking mechanism wasn’t nearly long enough to get my hand in there easily to make adjustments. So, I elected to take that out and replaced it with the standard apex which has a ⅜” thread adapter. I placed a Sunwayfoto XB 52 ball head on it, and added the RRS Lever Release clamp. I don’t have a scale handy, but I’d say that the tripod kit as it sits now is right around 6 lbs. Shooting with the TR343L is as expected; it’s got the same stability as the RRS, or an equivalent tripod with 34mm legs and a no-center column apex. Rock solid. It’ll take some getting used to for me to not have a center column, but center columns are the source for unnecessary flex in a tripod, and that’s the same for using the tripod for photography or shooting.

The leveling head option for me didn’t work out as planned, but I’ll keep it for future use.

In summary, I think that the PMG TR343L is a fine alternative to a RRS, or a Feisol. It’s right in the same ballpark in terms of price for the Feisol tripods as well. For those looking to go against the grain and are willing to step outside the hype box, take a look at the PMG tripods, you won’t be disappointed!

Sorry, the comment form is closed at this time.