I have always been a huge Leupold fan. I bought my first serious precision rifle immediately after graduating sniper school way back in 1999, and on top of that rifle was the venerable Mark 4 3.5x – 10x with M1 turrets. I still have that scope to this day, and I’ve since swapped the reticle to a TMR and changed out the MOA turrets to Milradian based adjustments. That scope still tracks true, and is bombproof, in the literal sense. Fast forward to the year 2004 as I stepped off on a combat deployment to Iraq. My platoon was fortunate enough to receive a bunch of funding for updated gear for that deployment, and we elected to purchase 8x Leupold Mark 4 4.5x – 14x scopes to replace the tired and long since unreliable Unertl 10x scope that lived on our M40 A3’s. That proved to be an excellent decision as those replacements never lost zero, even after some horrific and serious run-ins with IED’s and indirect fire. One of my platoon mates’ Leupold took a direct hit from a piece of mortar fragmentation while he was carrying the rifle in a movement to contact. The rifle scope undoubtedly saved his life, as the piece of fragmentation was about 1” long with the diameter of a pencil and the optic kept that fragmentation from hitting him. That scope still lives at Leupold as a testimony to the durability of Leupold products, and it still held zero. So, yeah, I’m a fan. 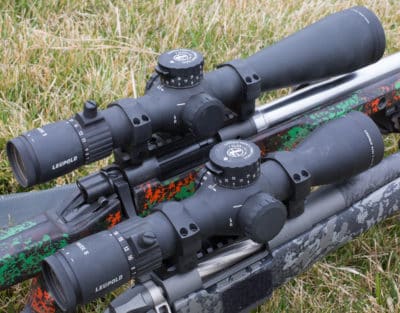 During the recent explosion in growth within the precision shooting community, Leupold was concentrating on a lot of defense contracts producing scopes that truly defying what was once thought to be impossible with regards to optical systems with the Mk 8 CQBSS, and the Mk 6 3x-18x. So, other manufacturers began filling the requests from precision rifle shooters with advanced features (advanced for the times) such as front focal plane reticles, illumination, more forgiving eyeboxes, and more elevation travel, among other things. Well, Leupold listened, and stepped up to the plate this year with the Mark 5 line to meet the competition, and I think they absolutely crushed it. The Mark 5 line of scopes are impressive in a lot of ways, and I was fortunate enough to be a part of the testing and evaluation process with the early models. The Mark 5 line was meant to fill the customers’ needs by building a scope that shooters wanted without the rest of the fluff that adds costs and weight. Weight is a big deal to me, as I spend a lot of time carrying my life around with me on my back. In addition to that, the durability aspect needs to be there too, because I absolutely need the confidence that my riflescope will survive 8 days on my back in the mountains and still put bullets exactly where I want them, when I want them there under any circumstance. That’s the reason I choose Leupold, among one or two other brands.

The Mark 5 line has two variants. A 3.6x-18x magnification range, and a 5x-25x magnification range. Both optics have some similar attributes which I’ll discuss first before discussing them individually. Both optics have a 5x zoom ratio and that’s important because the lower zoom ratio provides a high-quality image without working the light so much as a higher zoom ratio does. “Working” light less basically means the light has less lens to air surfaces to navigate as it makes its way to your eye, which results in less aberrations and other distortions that affect clarity and image resolution. Each of the Mark 5 scopes offer Leupold’s Twilight Max HD lens coating which optimizes light transmission and manages glare for low-light conditions. Not all scopes do this, and it’s a known fact in the optical world that other manufacturers optimize their coatings to look really bright and clear under artificial store lighting. As a hunter, I look very closely at low-light performance, and diligently compare hunting and potential duty-use optics under those conditions, as that’s usually where I’ll be needing them to perform. 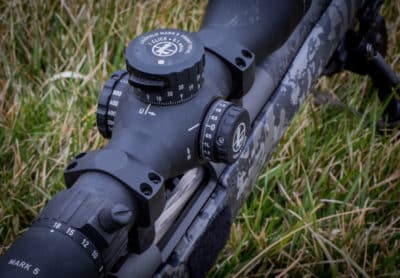 Both scopes offer Leupold’s zero-lock feature which allows the elevation turret to lock at the user’s initial zero distance. I find this as a nice feature, as I really don’t see the need for locking turrets on a scope that’s not going to see hard operational use. (I consider hard operational use to be military operations.) The turret clicks are positive by feel, as well as audibly. The turrets have a rotation indicator that is unobtrusive, but it does it’s job. The windage turret is covered, and Leupold drifted away from the traditionally located zero mark and went with a mark that is visible from the top of the scope, more in-line with the shooter’s view on the windage turret. It takes some getting used to, and I’ll admit that I needed to make some co-witness marks to make sure I wasn’t a tenth off with my windage zero points. The ocular focus diopter is smooth, but has enough positive resistance to make sure the diopter doesn’t inadvertently move. I don’t run scope caps attached to my scopes, so this is less of a problem for me, but for peace of mind, co-witness marks don’t hurt to make sure your diopter is set when you make your pre-firing checks. The parallax adjustment on both of these scopes is extremely crisp and the focus resolution is still readily apparent even beyond 1000-1100 yards. I can focus the 5x-25x down to about 35’ in my home for indoor dry-fire practice without issue. You can get both scopes in a pretty wide array of reticles that are commonly used in hunting or practical rifle competition, but I’ll save the reticle conversation for another post. Both scopes come in a 35mm main tube. Some people balk at that and I honestly don’t know why. The 35mm main tube gave Leupold the room they needed to get some more elevation travel that everyone wants. People make the complaint that not many rings are offered in 35mm, which I don’t find to be true at all. Another argument is ring interchangeability from scope to scope, but a rifle scope needs rings, so there’s that…. Both of the optics I had for testing tracked impeccably, and continue to do so. 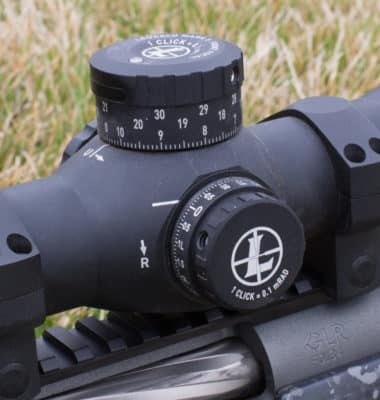 The windage marking is in a different location than the norm, and Leupold decided to put it there to make it easier to see from the majority of the angles that it would be viewed by shooters. Some don’t like it, but then again, not many shooters are dialing wind other than for zeroing. Also in this photo we can see the first turret revolution indicator. The zero lock release stays flush, as does the small silver button on the top of the turret for the first revolution of elevation. 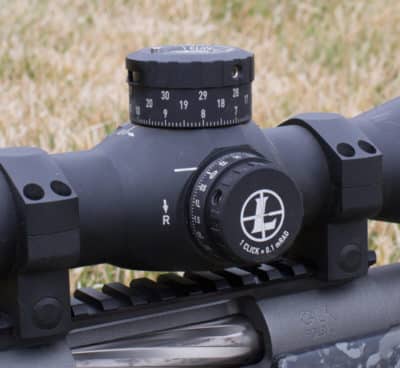 Here the turret revolution indicator shows that the elevation turret is on it’s second revolution. The zero lock button is recessed, and the small silver knob on the top of the turret is protruding.

The 3.6x – 18x is an awesome compact scope that is full of features in a lightweight package. At 12.06” long and 26 ounces, its one of the lightest scopes in its magnification class. I prefer the lower magnification range for rifles that will see medium-range engagements such as in hunting, designated marksman missions, or Law Enforcement sniper applications. For being so short and compact, the scope’s optical system speed is incredibly forgiving and the color and contrast resolution is amazing in low light conditions. The 3.6x – 18x has 29.1 mils of elevation travel which is impressive for a scope this short. This scope comes in at an MSRP of $2399.99. A comparable optic in its class would be the Nightforce ATACR 4-14 F1, and that scope comes in at 12.6” long, 30 ounces, with 26 mils of elevation travel and an MSRP of $2425. The 3.6x – 18x lives between a couple rifles of mine, and zero changes are quick, easy, and painless.

The 5x -25x version lives on one of my competition rifles. It meets every need and want for a scope used in practical rifle competitions in an incredibly lightweight package. The 5x – 25x comes in at 15.67” long, 30 ounces, and 34.9 mils of elevation travel, and like it’s lower magnification brother, its one of the lightest optics in its magnification class. Coming in at an MSRP of $2599.99, in my opinion it’s priced very competitively for the features it offers. The 5x – 25x length makes the optical system exceptionally efficient, and it produces extremely high quality images under a wide variety of lighting conditions. A comparable optic to the 5x – 25x would be the Nightforce ATACR 5x – 25x F1 which is 15.37” long, 38 ounces, and offers 35 mils of elevation travel with an MSRP of $2999.00

Leupold answered the customer with two really awesome products this year that will fill lots of roles within the shooting sports. Granted, optics conversations are largely subjective to opinion, and can be the start of let’s call them “spirited” discussions. Everyone is entitled to their own opinion, and as such, this review is just that; my opinion. I spend a lot of time looking at and through optics at classes, and I can make the absolute statement that not all optics are created equal, even the perceived “high-end” glass. Consumers owe it to themselves to take a hard look at what they’re buying before they succumb to industry hype. Modern rifle scopes aren’t cheap by any stretch, so do yourself a favor and try to do realistic comparisons for yourself while you use the information presented to you in reviews like this. For those that are skeptical of Leupold products because they haven’t been a front-runner in the optics that have been prominent in practical rifle competitions; keep in mind that they were a bit busy outfitting our country’s snipers with some truly remarkable and innovative riflescopes.